skip to main | skip to sidebar

Let There Be Peace on Earth 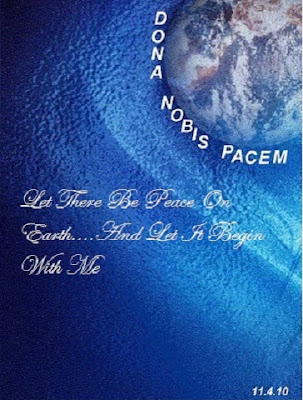 Today's the day for blog blast to peace. People all over the world will be blogging, tweeting and facebooking about peace, about ways to make the world a better place. What is there to say that hasn't already been said?

This past Thanksgiving (Canadian Thanksgiving, in October), with my parents at our family cottage, after a turkey feast and a few glasses of wine, Mum and Dad started reminiscing. Dad had been reading my World War 1 novel, and the talk turned to their memories of the end of World War 2, when the soldiers began coming home. My parents were small children at the time, but two of my mother's uncles were overseas. Both returned. Mum still has letters they wrote home during the war. They are poignant for their very ordinariness, full of questions about brothers and sisters and doings on the family's small farm. Letters written by two young men who, in the normal run of things, would probably have never traveled outside of Canada.

In rural Nova Scotia there were no parades, no marching bands to greet them. The men came home one by one and each family welcomed them in its own way - a celebratory dinner, a round of visits to relatives. Then, life returned to its usual quiet routine, with a weight of anxiety removed, just as it does now when soldiers come home from Iraq and Afghanistan. But for each soldier and each family, life is permanently altered. The person who comes home is not the person who went to war.

One of my great-uncles was in Holland at the war's end. He couldn't say much in his letters and, according to my mother, he never spoke of his experiences, but they left him so badly shaken that he never recovered. I think he might have been involved in the liberation of some of the concentration camps, and he just couldn't process what he saw there.

We tend to think of war as tragedy on a large scale. Perhaps peace would be easier to achieve if we remembered more often that war is really thousands of personal tragedies woven together. Maybe that's the way to make 'never again' a reality.
Posted by Jennie Marsland at 7:48 AM

In a city riding the current of war and change, their only refuge is in each other's hearts.

What Readers Are Saying

"It's hard to classify Shattered as historical romance or historical fiction, but one thing it is for certain is GORGEOUS."

"Marsland captures the image of a lonesome frontier that is both beautiful and dangerous." Aubrie Dionne

Find Me at AuthorsDen

where authors and readers come together!

My debut historical romance from Bluewood Publishing. He needs a wife. She needs a home. Love has nothing to do with it...but hearts have a will of their own.

The second novel in the Wallace Flats series. Sometimes you have to leave everything behind to find your heart's true home.

Jennie Marsland
I'm a teacher, an amateur musician and, for over thirty years, a writer. I fell in love with words at a very early age, and the affair has been life-long. Glimpses of the past spark my imagination. There's an archaeologist buried in me somewhere. I'm currently working on a series following the McShannon family as they put down roots and find love in the old world and the new, against the background of the American Civil War. Along with this series, I'm writing a story set at the time of the Halifax Explosion in 1917. I'm really enjoying delving into the history in my own backyard. I write for children as well as adults. When I'm not writing I garden, play guitar and spend time with my DH, our cat Emily, and our dogs Chance and Echo, the most spoiled Duck Tolling Retrievers on the planet. I live in Nova Scotia, in my opinion the most beautiful place in the world.